21. The Harder They Fall

Another season in decline (by our figures) for Collingwood in 2014, as they slip further again, and by a record amount.
Their -45 point drop is the largest of the season. Also as per the ladder below, it is also a -4 poisiton change. Collingwood are now 13th by our rankings.

Over 2014, they have dropped in ranking as per the charts below. 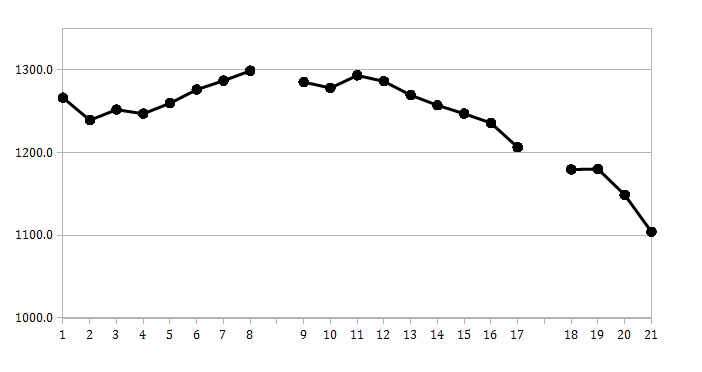 Note also in the two charts the blanks represent the bye in the '6 game bye x 3 weeks' (rounds 8-10) and the week off during the split round 18.

These are the three team to have lost the most nett points in 2014, and also as a percentage of their starting point.

The charts also show its been mostly an under-performing Collingwood since their round 8 bye.


So glad we posted last week that Collingwood...


"are now a rock solid, middle of the road football club, bound for week-in, week-out drudgery."


THE RESULTS:
It was all going on so nice before Saturday night.
Tipping was sitting at 4 from 4, and the margin differences from actual were all under 12 points including our first exact for the season.
But it fell away with 3 misses, leaving us on 6 from 9. 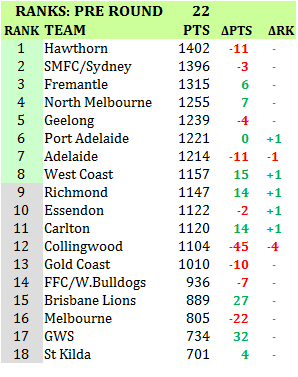 As before, Collingwoods 'largesse' sees them drop 4 spots enabling West Coast (into 8th), Richmond Essendon and Cartlon all to climb over them.
Not a bad list of your most hated rival in that lot!

Port Adelaide also did exactly as predicted (win by 9 points) so do not change rankings points, but gain a spot over Adelaide.
Adelaide were expected to win, but the Tigers winning streak drops the Crows down a notch.

GWS' big win sees them grab another 32 points as the bottom end of the table.
Posted by The FMI at 14:13