During the year, we looked back at our tipping for the season and wondered why a bare 70% return is something we should be proud of. Surely a better number would be closer to 80%.

In comparing to others that use mathematical models, we actually compared reasonably well. Also around that time, we were also stick just outside the top 10 of the Monash Uni tipping competition,and convinced breaking into that elite top 5 was not possible.

Potential reviews to the tipping system were proposed for an off season rejig. Plans were made and theories expanded upon.

But late last week, we received a tweet that made a difference. A regular user of our tips in her local competition tweeted that
"I'm winning the tipping!!".
Such a filip!

And over the months our performance in the Monash Uni stakes have risen as well. And then, we actually achieve something this week that has eluded us all this season. We tipped the full round correct - a lovely big Nine! And also the data from the Monash site says our points (currently 1732) would be enough to place us 2nd, just 1 point off the top.

So happy to see the system working... hold all those review plans!!

(PS... yes we are actually 9th, but only because a few tips were not entered in before the lockout, and dear reader, you know our numbers are here every week before the round starts).


THE RESULTS:
A nine from nine for the first time in the year, and also two games tipped to within a goal, and another within 2 goals... solid tipping. 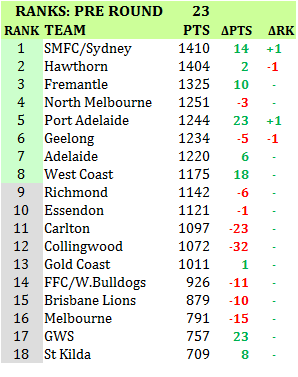 So with our first perfect Nine, and almost 'The One' on top of the Monash system (blowing our own trumpet) behind us, lets return to the rankings table.

But speaking of One... we have a new rankings leader with Sydney now top of the tree.
A better than expected win over the Bulldogs has then up 14 points, and enough to sneak first from Hawthorn.

This is the first time the Hawks have been displaced since mid 2012.

Also changing places are Port Adelaide up to 5th, while Geelong drop to 6th.

Further down the table, another big drop to Collingwood, after failing to meet expectations against GWS, who of course did better than expected, and collected another 23 points.

Richmond's winning streak is yet to materialise into an 8th ranking, as both Adelaide and West Coast also improve.
Posted by The FMI at 20:59