Two weeks - it is such a long time in Football.

No sooner than we pronounce that "We cant see St Kilda winning another game", they come out and defeat Fremantle.
Add to that wins to a few other teams against predictions (Adelaide, Brisbane), and losses by the Suns Dockers and Magpies has certainly shaken things up.


As before, all the seasons results are fed into our tables and spreadsheets to determine who would finish where at seasons end. We applied our ranking numbers to the remainder of draw and made predictive attempts at results based on those rankings.

After running the simulations of the season, we look at two forms of results. The charts below are produced from the accumulated ladders after each simulated seasons, and also the number of wins per team per season.


Ladder Positions
With only 5 games to play, it is getting a little easier to slot teams into positions.
Our test data created the following 'most likely' positions at seasons end.

Sydney remain as our most likely minor Premiers, and have only Essendon and Port from the top 8 to play.
Hawthorn are expected in 2nd, with Fremantle and Port Adelaide queuing up in the rest of the double chance slots.
Of the top 8 sides, the Hawks play Fremantle and Geelong , while Port Adelaide play Sydney and Fremantle. The Dockers, obviously then, play Hawthorn and the Power, with a Geelong game to boot!


The remaining 5 places in the 8, are spread between the Gold Coast, Collingwood, Geelong and North Melbourne.
Oops, must add in Adelaide and Essendon, as they are there now and we expect them to hold as well. The double losses to both the Suns and Pies in rounds 16 and 17 have made it real hard for them to get back to finals action.

In chart form, this is how we see of teams finishing at seasons end. So Collingwood are penciled in for 9th (sorry Richmond-ninth jokers out there), with the Suns finishing 10th, after a brilliant 4th season in the AFL.

We still see St Kilda finishing last, and GWS slipped from 16th to 17th after results from the two recent rounds.


Looking at the % chances of finishing in positions, the table below was formed. 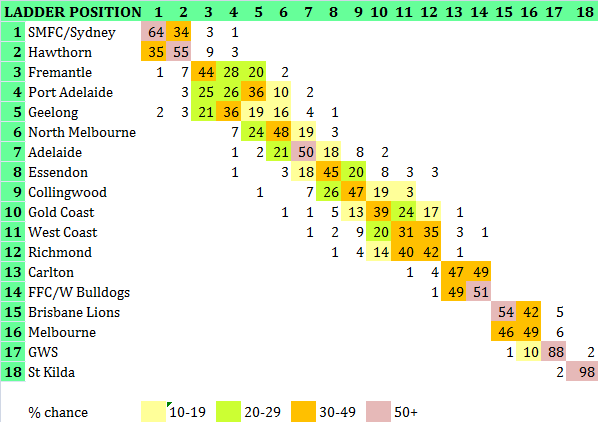 Sydney have jumped from 84% to 94% likely-hood of finishing 1st or 2nd.
At the other end, Saints will finish last, headed by the GWS... finally not spooners.
Brisbane scoring a win over the Suns now puts them into a scrap for 15th with Melbourne

PS... yes there are rounding errors in the above.


Its All About Wins
Using a calculation around the predicted number of wins per team, we get a slightly different 2014 ladder prediction. 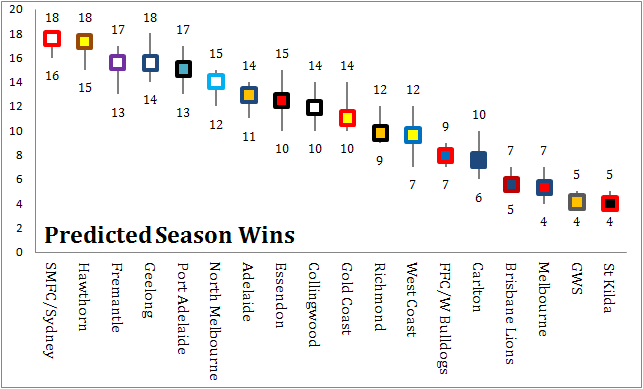 Under this methodology, we have Sydney again as Minor Premiers, with Hawthorn close behind, and then a small step down to Fremantle and Geelong behind them as the top 4. Geelong under this system getting 4th ahead of Port.

As per the ladder position estimation, Adelaide and Essendon round out the 8, with Gold Coast and Collingwood having trailed off in the last two weeks now missing out..


The percentage chances of wins in 2014 are displayed below, and it is bad news at the foot of the table.
[In the table below, the ◊ mark indicates the number of wins currently for each team (excluding Essendon, West Coast, Melbourne, St Kilda, Brisbane and the GWS, who have bolded text).] 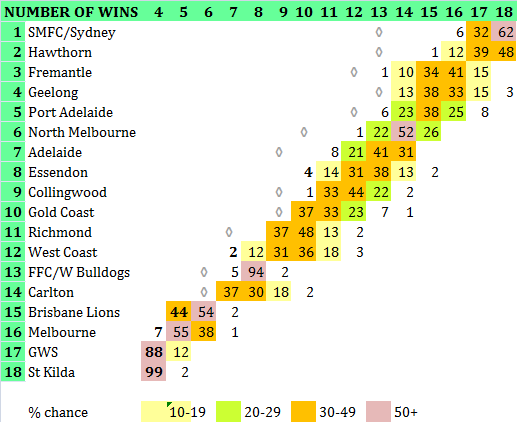 It was using this table that we last said that St Kilda wont win another game. Well, after two rounds and a win, their rank has changed to a point where we now see them having a 2% chance to win again.
And with games against the Suns, Bulldogs, Sydney, Richmond and Adelaide left, that 2% chance is possible a big underestimation.

Others likely to not win again are Melbourne, Brisbane and GWS, with West Coast (2%) and Essendon (4%).

By the above, 13 wins seems to be the break-even for Finals footy. With that though Collingwood have a 24% chance of 13 wins or better, and a 34% chance of finishing 8th or better (from the above ladder position table). This implies there are circumstances where 12 wins will be enough, if you have a good enough percentage.