One thing we have not done much this year is analyse the data and identify much in the way of trends... the outside influences of life sometimes distract.

A simple analysis that is quick and easy to prepare is to examine how each team has tracked over the season. Lets check your teams rankings position and points movements.

Hawthorn and Fremantle the only teams to not have moved position in the rankings chart, but they have both lost a small amount of rankings points.
The Saints have lost the most points, down 27.6%, and also have lost 4 positions. Carlton also down 4 positions, and a 7.7% drop.
Richmond and Brisbane have both lost over 10% of their value (Bris 12.9% and Rich 10.6%). 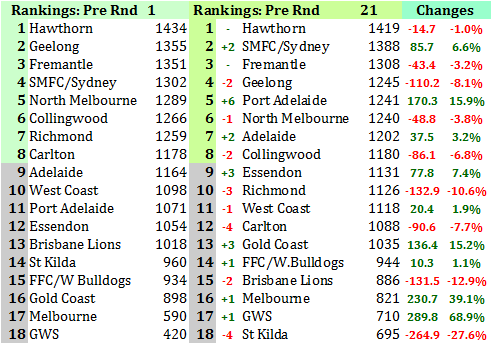 Teams that have benefited most this season are Port Adelaide, up 6 positions and a big 15.9% rise in value Also up are Essendon and the Gold Coast, both up 3 positions and the Suns up 15.2% (from a lower base). Essendon up 7.4%.
Melbourne and the GWS have also risen dramatically, collecting over 200 points each, and rises of 39% and 69% respectively (again from lower bases)

Charting these movements gives the below sets of charts.

Clearly seen in these charts are the following rises

The charts also show where teams have gone backwards.