Season 2014 is over for 10 clubs, and also for regular tipping comps.
For us we round out the normal tipping season with 142 from the 198 games (yes that includes the draw, as most bog-standard tipping comps count it too), or 71.4% correct.

Our real measure remains the Monash Uni competition where our method sits at equal second on 1809 points, just 3 points behind the leader.

And of course, the Monash system continues through the finals, so therefore we also continue into the finals.

But first, this past week.

RESULTS:
Another handy 7 from 9, with the full 9 spoilt by the Richmond revival and the GWS holding on against Footscray.

Close margin tipping as well, with 3 games out by just under 3 goals, and as predicted, the close one of the round, a 3 point margin error in the drawn game. 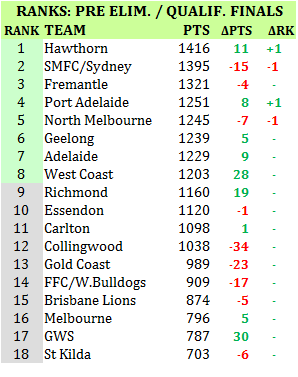 Sydney not winning means the Hawks regain top spot on the back of their better than expected demolishing of the fading Collingwood.

Also, Port Adelaide were honourable in defeat against Fremantle, earning a rise over North Melbourne, who also did not perform to expectations so drop a spot.

Our best 8 has Adelaide ans West Coast in 7th and 8th, two teams who did not make the AFL finals.
In their stead are Richmond and Essendon, bot of whom have dome enough to win matches all year, but usually by less than or just more than expected, so our rankings don't boost them by that much to be in our best 8.

Looking at those 4 teams we can look back at performance vs expectation.

In all 22 matches that each team played:

So, as oft stated with our rankings, if you better expectations (win by more than expected, win against the tip, or lose by less than expected) your ranking point tally increases.
With Adelaide and West Coast bettering the expectation more than not, they were able to rank higher than Richmond and Essendon.
Posted by The FMI at 16:41