24. Rule Thirty Pts: For and Against

Earlier in the year, the Champion Data account tweeted an interesting stat...


Now, that was back in May, so there have been more instances of that rule holding in the (vast) majority of cases.

And in the finals, with the 'best 8 teams of the season' playing, we saw another 2 instances of the '30 point rule' in play.

One, was of course, where Port Adelaide headed Richmond by 31 points in the 13th minute of the first quarter.
Then the rule held fast, and Tigers never got as close again all game.

There was another this week, with Essendon scooting away to a 33 point lead in the 3rd minute of the 3rd quarter after Paul Chapman kicked another goal.
In this instance, the Kangaroos were able to claw back and win, in a finals-rebuttal to the season-long weight of evidence that the 30 point rule is valid.

It would be good to see the full season count of that rule at seasons end.

A set of four predicted wins from the four games on the weekend, and even better, two of those were inside a goal of our predicted margin.

In fact, as we round out the season in these last few weeks, its all looking rosy on the FMI tipping front after our earlier doubts.


As above, we were almost spot on with the North Melbourne result, and 4 points off with Sydney. 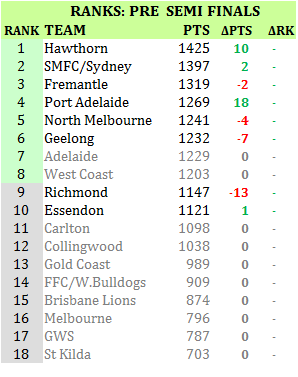 Not much change to the table with only 8 teams in action, but worth noting our 9th and 10th ranked teams bow out, leaving the top 6 to play on.