Yep, no doubt you have heard the details now, but here is where I firt saw it, prior to be listed on the Seven coverage post game.


Which means we only have four teams left, to be sorted out next week.

As to tipping, we got one right (and very close), but missed the rolling thunder that is PortMentum.

RESULTS:
North galloped away nicely , but were eventually dragged back to be a lot closer to our tipped margin. 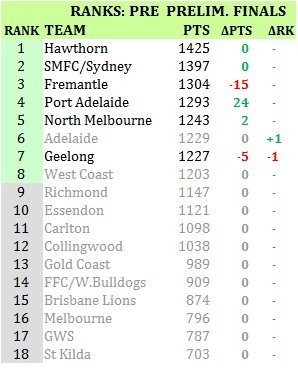 With only 6 active teams in the finals, there was little movement in the board, other than Geelong dropping 5 points and a position on the table.

Adelaide the beneficiary. We know rank them 6th, the highest they have been all season.

At 1229 points, it is also the highest rankings points score for Adelaide in the Sanderson coaching tenure since the end of 2012, when the club had finished as beaten Prelim finalists and had Tippett playing, and before that whole issue blew-up.
Posted by The FMI at 21:09