So after the last weekend's results, we have the top two ranked teams, the top two of the AFL ladder, going into the Grand Final. 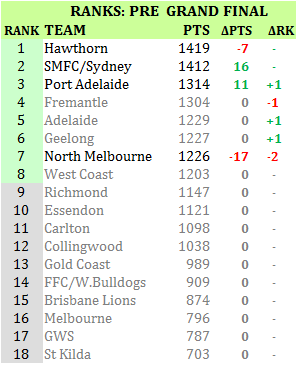 Our tips were correct, but out on the margins by too much to be considered accurate.

The bigger win by Sydney sees them move to within 7 points of Hawthorn at the top, and makes next weeks game a real 'in the balance' contest.

With North Melbourne doing much worse than we expected, it penalizes them significantly and drops them down to 7th on 1226 points.
That said, 5th to 7th are separated by 3 points, so an 'equal 5th' status is appropriate.

Port Adelaide rounded out a great finals campaign by running the reigning Premiers to within a goal. Unfortunate not to go to the Grand Final, but an excellent season all up.
They now climb to 3rd, which is impressive given they were 11th at the start of 2014.