And with that dee-stroyation by Hawthorn, the sun sets on Season 2014. One that had us ranking the Hawks as the best team of the season for all weeks bar after round 22, where they were pipped by Sydney by 8 points.

The Swans also were great contributors all year, starting as our 4th ranked team, and finishing 2nd. One one occasion, as above, the were our best team, and they also spend the early part of the season ranked 7th. From round 12 onward though they were a solid 2nd best ranked.

THE RESULTS:
We tipped the Hawks to win, but not by anywhere near the actual margin. 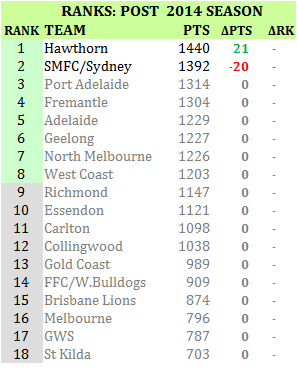 Joining us in tipping Hawthorn was one other of the Guardian's statistical tippers (Robert from aflpredictions), and also Ted Hopkins, formerly of Carlton and Champion Data.

Both Ted and Robert were in general agreement with our calculations... that the Hawks would win... just.

The folks over at FootyForecaster also went for the Hawks, but by 11 points.

We will leave it to others to write about why so many other pundits went for the Swans to win.


Monash Result:
Heading into the last game of the year, our tips would have scored 1900 points under the Monash Uni tipping competition rules. This score would have been 9 points ahead of the nearest competitor.

With Hawthorn winning, we collect another 10 points, and with the maximum on offer for this game being 16, we are confident in saying our system would have won the Monash Uni competition.

EDIT: Confirmation that the best Monash score is 149 correct tips and 1891 points.
Our score of 1910 points and 150 correct tips would have won the 2014 competition.


Final comments:
That wraps up the rankings table from us for the year. Your finishing order is at right with surprise packets Adelaide in 5th and West Coast also 8th having missed the finals. Can they be genuine contenders in 2015?

Note also there is correaltion between our rankings and those at FootyForecaster as well as Troy Wheately's Power Rankings as well.

We will make further assessment on the table in coming weeks.

Also, after a year using Open Office as a spread sheeting tool, we will likely move to a new format in 2015, in line with the re-design of the site.


Thanks to all who have read the blog and followed the tips... I know a few have done well in their respective tipping competitions, and we hope to have a better year next year after a few more fine-tunes to the system.
Posted by The FMI at 15:09