Way back (...waaay back) at the start of 2013, we posted our solution to the unfairness in the AFL draw. A solution to the perennial problem that teams were not playing each other home and away, and that some teams were getting soft draws.

The simple fix may seem complex at first, but is really not that difficult to understand. Its about dividing the eighteen teams into 3 conferences of six teams each. The full detail is in the link above for those that have not read it yet.

It is also done in such a way so that the structure and method is clear and transparent. 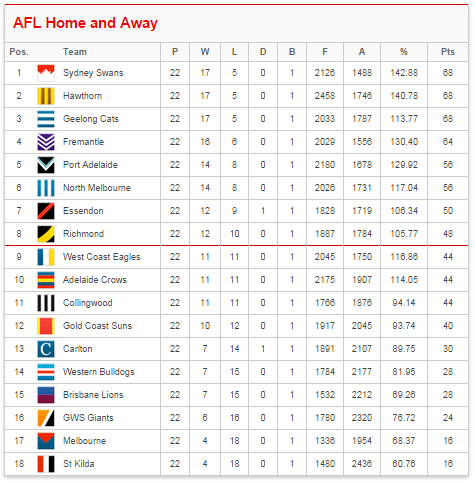 The three conferences are generated so that each team inside a conference plays against its conference opponents twice (home and away) and they also play outside their conference once each. These inter-conference games also allow for addressing fixture irregularities such as interstate travel balancing etc.

So to apply the proposition above to the 2015 fixture, we take the 2014 ladder (at right) and split the teams as per the description above.

Note also, that we use the ladder at the end of the home and away series, as this is the most balanced outcome of the year.

Adjustments to ladder positions from the finals series are not included as (obviously) not all teams have the opportunity to adjust their ladder position.

So into the groups (and to play each other twice):

Which means, by our proposed system, for 2015:
... the Western Derby is on! Home and away, but
... there is only one SA Showdown, one Q-Clash and one Sydney Derby.
and
... only one Essendon v Collingwood game and one Carlton v Collingwood clash.

As before, this looks like an imbalance in travel requirements, but as teams play another 10 games outside of their conference, the apparent imbalance is redressed.
In the above scenario, Geelong plays 5 away games interstate, so is scheduled no other interstate games from the other 12 games they need to play
Also the Victorian clubs that have only Port Adelaide as an interstate member of their conference are required to have another 4 away games in other states to balance their allotment.


While the above hinders the AFL's directive to generate as much cash as possible (sorry) satisfy its obligations to is broadcast partners (sorry) schedule the most attractive games during the year and maximize attendances, it does ;


- balance the draw,
- give each lower team a chance to play a top team home and away, to increase their exposure and develop their brand,
- not create a 'lower clubs relegated to battles amongst themselves' ghetto,
- create all 18 teams as 'equal partners' in the struggle for the premiership.


The underlying tenet that this system has is it's transparency. It can be reproduced year on year, with an amalgam ladder of all 18 teams, and a reshuffle of the conferences based on that amalgam.
And it can be done by anyone at home, or in their workplace on the Monday after the last round.

When the dust settles on the AFL home and away system, every fan / 'stakeholder' can instantly work out where there team will be conferenced next year, and who their chief rivals will be.
There is no waiting for the decrees from AFL HQ on how they intend to fixture while maintaining the gerrymander that sees fixed blockbusters and derbies.

The AFL is the biggest, most dominant sporting code in Australia. At its core it is inherently unfair in its dealings with it 18 constituent parties, preferring instead to generate staggering revenues.

It is now strong enough that it should not sell its soul for even more astronomical revenues. It needs to become fairer, and demonstrably so.
This is one step in that direction.
Posted by The FMI at 08:00