With the draw known, and the return to football (for Premiership points) only a month or so away, the application of the FootyMaths numbers to predicting the season should be done.

As completed in the past (2012, 2013 and 2014), the teams and their rankings are applied to the AFL schedule, and predictions on match day outcomes are made. The process is randomised slightly within parameters specific to each teams ranking points, and repeated. And repeated and repeated, until over 1000 iterations have been run and compiled.

These numbers then feed into the tables and charts below.

So for season 2015, as it stands now, with no clarification about if players are suspended for any duration or not, the FootyMaths season predictions are below.

And there is a very good chance that none of it will be relevant once the AFL panel hands down its findings into what the Essendon players took.

Running through iterations of the 2015 season hundreds of times produces a great list of variable ladders at each seasons end. Collating and combining these allows the below 'percentage of possible ladder positions' outcome to be tabled and charted. 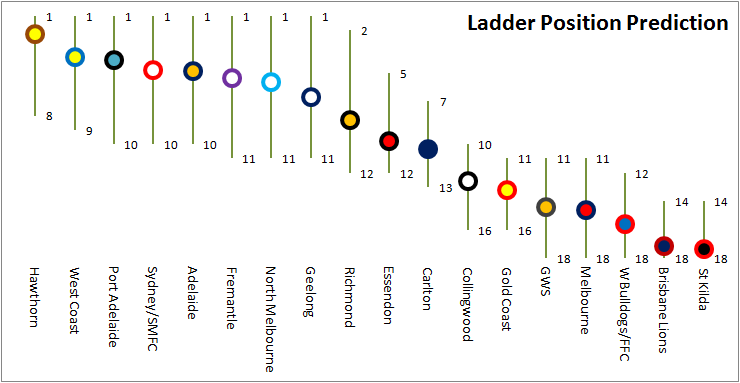 One immediate point of interest to highlight are that there are eight teams listed as potential minor premiers for the year (and five equally listed for last).

It is possible for any one of those eight to finish top of the table, but the percentage chance for each lessens as you move down the scale. For example, and in the table below, Hawthorn have a 47% chance to top the table, but Geelong have only a 2% chance.

The reverse is true for last place, where GWS and Melbourne have 2% and 1% chances respectively of last in the year.

Noteworthy also is just who finishes where in the top 8, with potentially nine strong candidates for the finals. And also the spread of outcomes among the contenders, particularly Port Adelaide, West Coast, Sydney, Adelaide, Fremantle and North Melbourne all make for picking exact positions inside the top 8 an exercise bordering on the impossible.

That the calculations provided a second placed finish for West Coast suggests a few possible tweaks to be investigated:
- Is the home ground advantage employed too great for the Eagles, or (and perhaps more importantly),
- Has West Coast been given an advantage from the AFL schedule.

On the second point, fixture analysis by Rohan Connolly suggested they have the 5th best schedule, where the FootyMaths system (in the same link) determined a more median outcome.


Also interestingly are the strong returns for Hawthorn to finish 1st (47% chance), Carlton to finish 11th (46%), Collingwood to finish 12th (50%) and St Kilda to collect another spoon (52%).
These numbers are all factors of current ranking and the draw, with the expected number of wins below providing a touch more clarity.

Working from the same numbers generated from the above season calculation iterations, the number of wins obtained per season is also examined to determine how each team can be expected to perform during the year.
Note, draws were possible, but not included into the data-set below.

Much like the ladder position chart above, there is a clear candidate for 'most wins' (Hawks), then a plateau of 6 to 7 clubs with similar expected win returns before the contenders drift off down to Carlton (expecting about 10 wins).

After that there is a big drop-off to a series of teams all in and around the 5 to 7 win mark, Collingwood, the Suns, Giants and Melbourne. 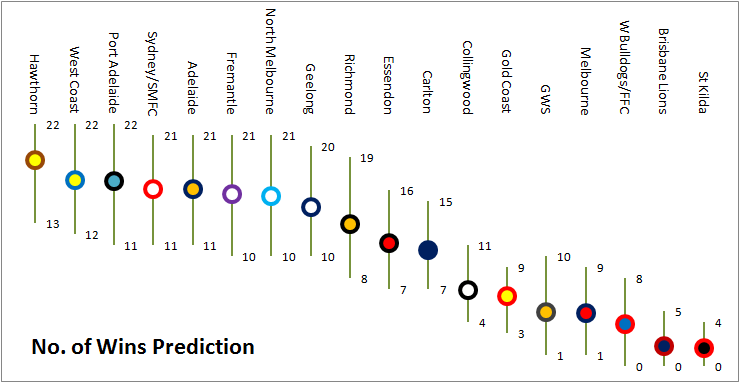 The finishing order above matches exactly the expectation on ladder position posted earlier, which is the first time in doing this type of analysis that this has happened. The previous 2 years had slight differences between estimations.

Again, the table below compiles the percentage chance of wins per team, to add more depth to the above chart. And like the chart above, the swathe of green in the results for teams from 2 to 9 indicates the even-ness of those teams and unpredictability of the season for those teams.

There are similar numbers in the ladder positions table above (6% for Carlton to finish 12th or lower and 7% for Collingwood to finish 11th or higher), and in the table below that looks at end of season rankings.

A first for the FootyMaths pre-season prediction this year.
Below are expectations for where each team will rank at seasons end using this system (and again all based on the same iterations of season matches as above).

To make the table easy and compact, 50 point brackets have been deployed. The aim is to group up individual results into a more reader friendly set of 'expectation windows'.

The table below is arranged down the left according to the 2014 end of season rankings, while the numbers and coloured squares indicate likelihood of finishing in a bracket. Further, the bold underlined text indicates in which bracket each team sits prior to season 2015.

From the above, the calculations have determined;
- A big increase in performance for GWS and Melbourne.
- Moderate increases for Adelaide, West Coast, Richmond, Carlton, and St Kilda.
- Even and stable seasons for Gold Coast, Essendon, Port Adelaide, Geelong and North Melbourne.
- Moderate declines in performance for Brisbane, Hawthorn, Collingwood and Fremantle.
- A large drop off for the Western Bulldogs and Sydney.