HEADING FOR A RECORD

Over the last few years, this blog has run a 'blow-out bin' page that chronicled the seasons games with margins of 60 points or more.
This was on the back of noting the alarming trend in blow-out games in recent times, as charted here. 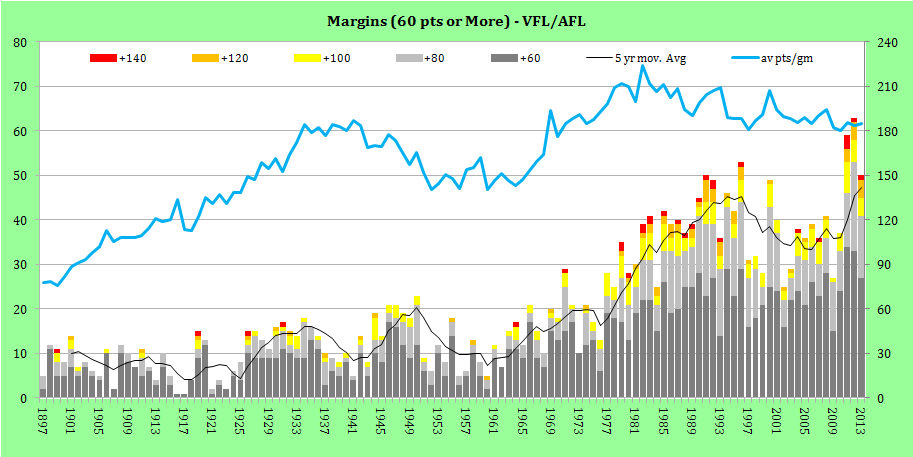 2011 and 2012 were the clear standout years for some teams smashing others through the history of VFL/AFL football. And those years also were not years with higher than normal scoring rates, as the blue line indicates.
What was happening was the overall scoring remained the same, but some teams just destroyed others on the ground. The FMI contention is that the rise in 60+ point blowouts relates to club financials, as written here previously.

It was not the intention to track blow-outs again in 2015. The season to date has been described as one of the most even for a long time, and the tipping data of most pundits reflect that.
Upsets have come with the GWS and Bulldogs winning. There has been variability in Hawthorn and Port Adelaide form and the mid range teams are closer in performance.

The data suggests it is harder to 'read' the outcomes of games this year, and the data also shows there is still a tendency for margins to be stretched.

The current list of AFL 'blow-out games is as here (with 10 rounds completed).

Looking closer in comparison to 2014 data, at the same point in the season there are:

There is a clear shift to date of less huge results, but still more games overall where 10 goals or more is the result.
Season 2015 is tracking to be worse than last for blow-out results, yet tipping is harder.

It is an interesting mix, and right now there are no clear answers.

But... 2014 was not the worst season for blow-out games. We need to reverse the way-back machine to 2012 to compare if this season is headed for the biggest train wreck of AFL/VFL history.
Twenty three blow-outs to date sets season 2015 to be bang on target to repeat 2012.
That year also had 23 blow-outs to round 10. It was also the year the Giants first started as well as the Suns' second year. Enough reasoning then for teams of kids to be well beaten, and the high-water mark to be set

Further, twelve teams to date have dealt 60 point thrashings, which is an interesting spread but also mirrored in 2012.
So too matching is that up to round 10 in both 2012 and 2015, ten teams have suffered these thrashings. The distribution has changed though, as in 2012, the GWS had suffered seven big losses in 10 games. This year the closest is Carlton with five.

But 3 years on from the introduction of the second new team... why is there a resurgence of blowouts?
What is the driver now?

If the driver for the increase in blow-outs is as contended before (the financial health of clubs past, and now the financial spend of present day), then AFL executive action is warranted.
The AFL has moved already in introducing a capped 'luxury tax', so its effects over the next 5 seasons will be interesting.
Initial findings suggest the luxury tax might not be much more than a chocolate teapot, and more measures could be needed to stem imbalance. 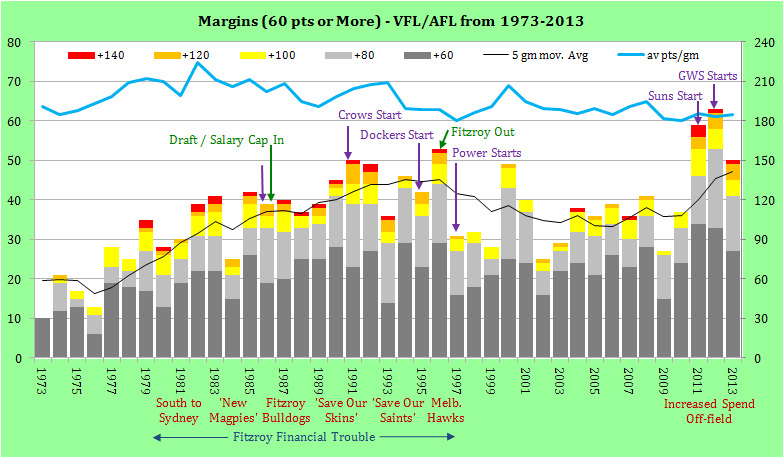