*EDIT*
The below was written and published the day before before the passing of Phil Walsh and subsequent cancellation of the Adelaide vs Geelong game.
The non-playing of this game will affect the predicted outcomes below.


As is becoming common around this time of the year. it is also time for the FootyMaths rankings to predicatively determine the final season ladder with 10 games left to play.

Earlier in the year, the full years schedule was used with the FootyMaths preseason rankings to make an estimation of the final season ladder, as posted here in February.
Back then there was an expectation of improvement in the bottom quarter of teams, some trailing off of the Swans and Dockers, and also an unexpected and unanswered (other than that they had an easy draw relative to their ranking) rise in the fortunes of the West Coast.


Once again, the concept is reasonably simple. The teams rankings as they stand now are used to estimate the future outcomes of the remaining 10 games, and the season ladder is calculated. Multiple iterations are run to produce as many likely outcomes as possible and to also balance out the outliers with the majority of results.
Also factored in are home ground advantages (or lack thereof) and other intrinsic details around the draw as per normal FootyMaths tipping.

With the iterations run, the first measure is to look at each seasons' theoretical ladder that gets produced, and determine possible windows of where teams will finish.
These are charted as below. 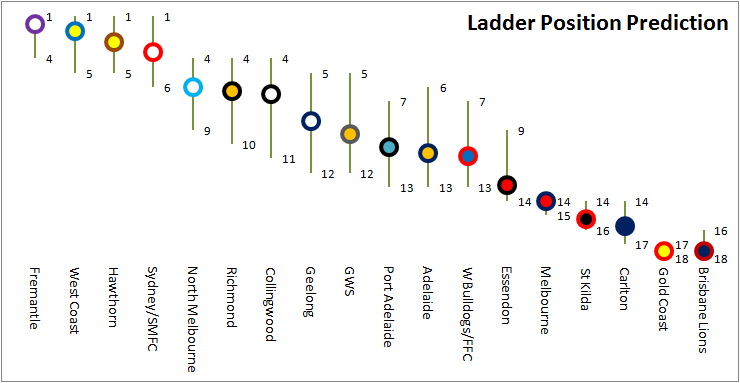 After the 12 games played, the expectation is that the season will have both WA teams finishing inside the top 4, with Sydney most likely to take 4th, leaving Hawthorn the only Melbourne based team to earn the home finals.
All of those teams should finish top 8 without any issue, and barring a Fremantle collapse, the Dockers should also be a top 4 lock.

The calculations suggest there is still another 8 teams with chances to make the 8, but as you can see from the percent probability table below, some nly have very slim chances to make the finals.
The expected 5th to 8th are North Melbourne (99%), Richmond (95%), Collingwood (91%) and Geelong (58%).


The above spreads highlight likelihoods of finishing position. Interesting numbers emerge to suggest there is no Septemnber action for teams from Essendon down.
Essendon and Melbourne in particular seemed destined for 13th and 14th respectively with over 80% chances of finishing in those spots. That said, the rankings still rate Essendon better than current form suggests, and it may be possible Essendon finish bottom 4.

And its the two Queensland teams who look most likely to finish last.

The other approach to looking at season end data is to look at the number of wins per team.

From the same dataset that generated the above, the number of wins can be estimated as per the chart below. 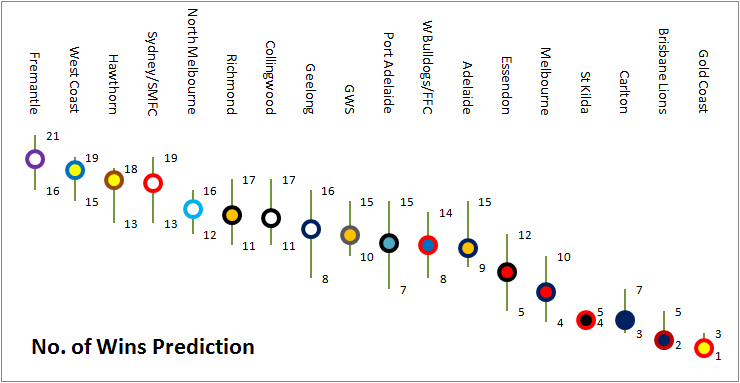 Looking at the above, there is a similar pattern to the ladder position data, with the two WA teams at the pointy end, and the two Queensland teams trailing off.

If, as the pundits say, 13 wins might be enough to make the finals, then this chart allows for as far down as Adelaide to sneak in as it stands now.
But that said, Port, the Bulldogs and Adelaide have 10% or less chance of achieving that.

The data table below shows the distribution of expected wins that the FootyMaths system is predicting.


The disappointing thing from the table above is that there are 3 teams that have reasonably high chances of not winning any of the next 10. Surely this is something all fans don't want to see happen. And certainly in the case of St Kilda, there is enough excitement in their play to suggest that data point is wrong.

To round out the data extraction from the season prediction, the team rankings can be examined and tabled at the end of each season's simulation.

The below table has been ordered into 50 point windows for simplicity. The bold underlined text indicates in which bracket each team sits prior to season 2015.


Quite a lot of movement in rankings above, particularly from the GWS, West Coast and St Kilda in the positive direction, and the Gold Coast, Carlton, Essendon and Adelaide in the negative.


This data will be reviewed and refreshed in the coming weeks, and re-blogged.
Posted by The FMI at 22:02