Two more games under the Season's collective belt, and the chances to progress to September narrow further. Six more chances remain to secure finals places. For some, the scenarios run here show there is still a wide variation of likely outcomes, and for others they sit now around about where they will at the end of the year.

Further, for even more analysis, try a similar approach done by Tony at the MatterOfStats webpage.
Love his 'these are the most influential games' to come list, at the foot of the page.

After correcting an error in the earlier post due to a calculation issue, the current expectation table has some interesting changes, and some things constant.

The top 4 remain as is, as does the bottom 6. Sydney have slipped into a solid 'we are finishing 4th' mode, and St Kilda with another win banked now are challenging Essendon for 13th.

For the top 8, in the scenarios run, the mix has changed again. North Melbourne returned a top 8 finish in 100% of scenarios, and with Carlton. Melbourne, St Kilda to come, you can see that happening.
Richmond were top 8 in 92% of scenarios and the Bulldogs in 79%. Adelaide and Collingwood both break over the 50% mark (Crows 54% and Magpies 50%) to straddle the border.
Slimmer chances rest with Geelong (21%) and GWS and Port (1% and 2% respectively).

Previously, Port needed to win 6 of their last 8 games. Dropping the showdown now means they need to win 5 of 6, and two of those games are against Hawthorn and Fremantle. It may come down to that last round game hosting the Dockers. 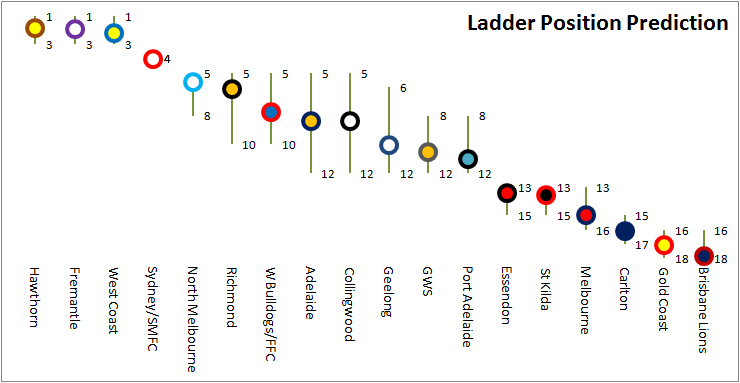 Hawthorn remain likely minor premiers, helped along by a healthy percentage.
Two more losses by Collingwood see them slip down the pecking order for the 8 race, and the Bulldogs good form has them a stronger chance.

The full list of outcomes from scenarios run (expressed as a percentage) is listed below.

As before, the season is over for teams from Essendon down, and all but over for Port Adelaide and the GWS.
The bottom 4 teams all record strong outcomes for their current position, but as before the strongest return was all scenarios run has Sydney finishing 4th.


The other approach to looking at season end data is to look at the number of wins per team (the below is based on wins only, and does not factor in draws nor for/against percentage).

From the same data set that generated the above, the number of wins can be estimated as per the chart below. 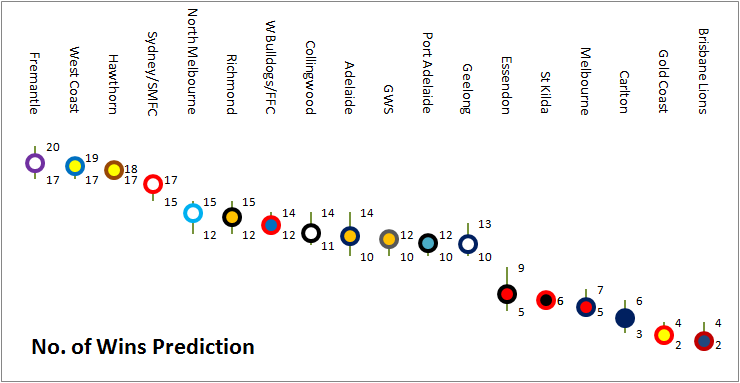 As per the previous data set, the same 4 teams fill the top 4 places, only West Coast and Fremantle move up ahead of Hawthorn. Fremantle can win all remaining games to finish with 20 wins, and this remained only an outcome in 2% of scenarios.
Hawthorn have an increasing percentage, and with that removed they do slip down the table.

Under the 'games won' scenario, the rest of the top 8 shake out the same as above. Winning 12 games remains the likely decider for finals action, and the scenarios that were ran determined that as many as 4 teams have reasonable likelihood of doing that and missing September.
This really highlights that a draw and percentage will be vital this season. Or to be safe, win 13 games.


Looking at the Arrow head marks, Port Adelaide seem a tad too far behind now to get to September (as the ladder position returns suggested). The FootyMaths system does rate North highly (but not Norf), so can see them winning at least 4 of the next 6, as mentioned earlier.

Again there is an expectation that the same 6 teams may not win another game of the remaining eight, and St Kilda in 100% of scenarios run did not win a game in the last 6 . Unlikely, but possible.

This data will be reviewed and refreshed in the coming weeks, and re-blogged.
Posted by The FMI at 08:06