*EDIT* Below has been edited since original posting after an error was noted in the calculations.

The season has progressed two more weeks and teams have won and lost games as normal, as well as two teams having a game called off in the most tragic of circumstances. And the Adelaide and Geelong 'draw' has impacted both teams season expectations.

In the earlier post around predicting the season table, Geelong and Adelaide were to play 10 more games and they were predicted to have some chance of making the finals

Adelaide have since had the 'draw' and a loss to West Coast, and have seen their finals chances now slim, having 'won' enough games in 18% of the scenarios to make a top 8 position. Geelong also had a loss to add to the 'draw' and also have an 18% scenario win return that sees them claim a top 8 place.

This has opened the door for Port Adelaide to make a serious finals tilt. Current expectations have them with a 56% of the results returing them in the top 8. Port will need to win a 6 of their upcoming games 8 games though, which may be a tall order! 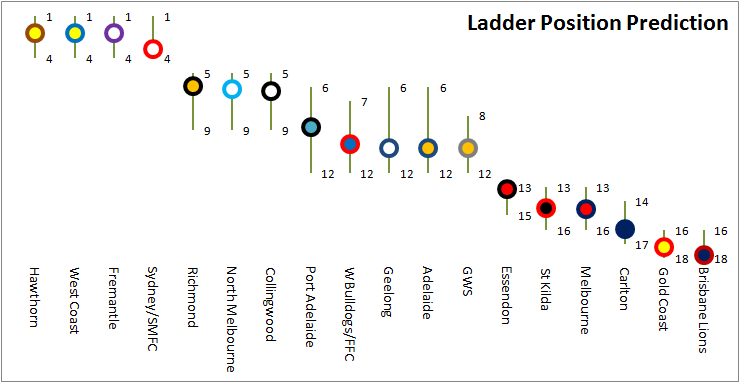 There are still 4 other teams with chances of making the finals.
Joining the aforementioned Geelong and Adelaide are the Bulldogs (9% return) and the GWS (5%)

The predictions now also place Hawthorn as minor premier, pushing Fremantle to 3rd with the Eagles in second. Thise three hold the best positions for the minor premiership, and in all scenarios were never out of a top 4 spot. Sydney registered 0.1% scenario returns outside positions 1 to 4.
Richmond move into 5th. North Melbourne were 5th but slip to 6th. Both those teams and Collingwood are also showing possible scenarios where they run 9th, as per the below table.


As before, the season is over for teams from Essendon down.
St Kilda's recent good form has given them hope to finish somewhere between 13th and 16th, and Essendon could yet finish bottom 4, but after the win last week they may not. They will need to beat the GWS or Suns to avoid that.

The other approach to looking at season end data is to look at the number of wins per team (the below is based on wins only, and does not factor in draws nor for/against percentage).

From the same data set that generated the above, the number of wins can be estimated as per the chart below. 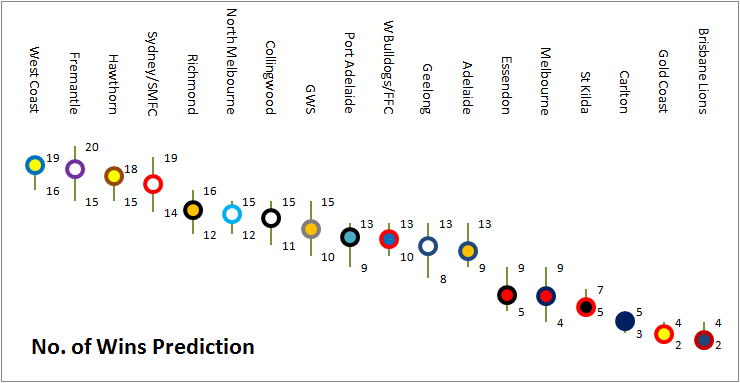 As per the previous data set, the same 4 teams fill the top 4 places, only West Coast and Fremantle move up ahead of Hawthorn. Fremantle can win all remaining games to finish with 20 wins, but there were only 2% of scenarios where that was likely.
Hawthorn have a brilliant percentage now, and with that removed they do slip down the table.

Under the 'games won' scenario, the GWS bob-up in 8th, but there are two other teams that also have a high 40% return of 12 wins from scenarios simulated. Eighth this year is a real lottery, and the below table with its changes from the full ladder scenarios above highlights that a draw and percentage will be vital this season.


Above also shows the Bulldogs (now with 9 wins) most likely to win 2 or thee matches. Their 8 remaining opponents are Geel, Coll, Ess, PA (in Melb), Melb, WCE (at Subi), NM, and Bris (at Gabba).
If you 'bank' the Melbourne and Brisbane games, then to get a top 8 finish you would want them to beat Essendon, Collingwood, Port or Geelong. Can 1 of those three be picked-off? Can they also nick one from North?

Again there is an expectation that 6 teams may not win another game of the remaining eight. Unlikely, but possible.

This data will be reviewed and refreshed in the coming weeks, and re-blogged.
Posted by The FMI at 08:04