Short on content and high on irrelevancy... this is the wrap up from the first week of the finals.

The  biggest news of the round was was collectively the end of the run for the Bulldogs (considering the end of 2014 turmoil they were in) and the continuing story of courage from the players who tragically lost their mentor.

But in Melbourne all that was small fry to Richmond losing again.
Take a look at the below... The Age's coverage of the loss of the Bulldogs after a season that no-one predicted, but all were on board to enjoy at the end. At its side, the Adelaide headlines. 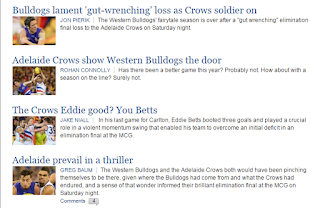 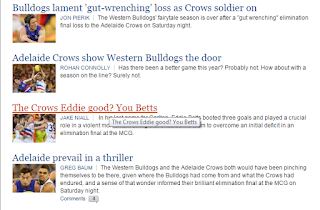 That's 4 articles each that appear under the 'Clubs' section of The Age's Real Footy / AFL section online.
And they are all shared articles. 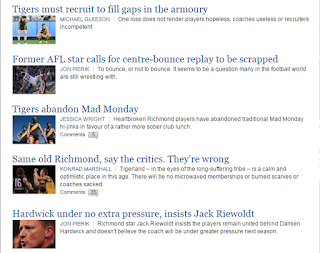 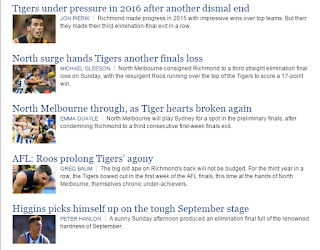 As Professor Dennis Twilight would have said many moons ago, The Age has 'gone in for a basin full'. A sum total of ten discreet articles by no more than 7 different writers. Five of the above are also shared on the 'North Melbourne' page of The Age.

And yet the real story of the season is the Dogs resurrection, and the Adelaide triumph through tragedy.


And speaking of the end of the Bulldogs adventure for 2015, this is a nice piece from The Bulldog Tragician. Apprehension, excitement and eventual anguish.
It is what we all feel at the football, but for fans who have tougher seasons more often than not, it will sing a tune you know too well.

For Bulldogs and Tigers fans, (and eventually fans of 5 more teams), despair not, for 2016 brings another go, another chance.


Tipping yielded 2 of 4 as the return, but more worthy was the excellent MAE return of under 17.

And somehow, through this quite difficult tipping season, the FMI tips have found themselves in 9th place, having risen from a sub 40 position early on.