Both games went the way of the favourites (in the FMI calculations at least). And both games set off with the underdogs skipping away to handy leads... before being pulled back. 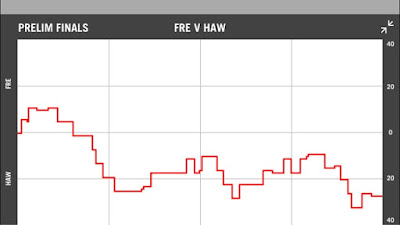 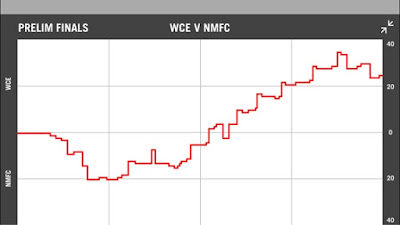 So with the expected happening after the early scare, the results from the week are.

Fremantle's loss was enough to penalise them 13 points on the FMI rankings, and send them down two positions. They now reside 8th in the rankings table below.

As much as the Dockers won 20 regular season games and finished Minor Premiers, they have been in a season long decline under these rankings. Yes winning games, but never bettering what was expected. Not pushing themselves, chasing the big kill.

They went under the FMI expectation in 11 games out of 17 from round 10 through to season end. And when they beat expectations, five of the 6 results from round 10 on were only 1 or 2 goals better than predicted.
All that adds up to a nett negative year for Fremantle.

And like last year, we have the Grand Finalists between the two best ranked teams of the season. Which is the result of the pre-finals blog post FINALS PRELUDE.
And oddly also the FMI pre-season prediction... Hawks 1st and Eagles 2nd. (With lots of other errors along the way). Also, Freo sliding out of the top 4!
Posted by The FMI at 08:00