The AFL is due to release their 2016 schedule this week.
And while they claim it is a fair system, it is actually the opposite of that.

The fairness they talk of is in pairing similar strength teams with each other, such as top 6 against top 6, bottom 6 against bottom 6, etc.

This may create a more even result on the day of the match, but it is not a 'fair' when teams play harder (and easier) fixtures over the course of the season. It handicaps the better teams and provides a bunk-up for the lower teams.

What is 'fair' is that all teams play a mixture of ranked opponents over the course of the season. A few seasons back the FMI solution was tabled on the blog to that effect. The scheduled matches should be based on a distributed system where each team plays others from across the spectrum of the ladder. (The blog post went further advocating for conferences, but the basic scheduling principle can be extracted from that easily and applied simply).

It is also done in such a way so that determining the schedule is via a clear and transparent method, as listed here.
Take the the 18 teams and split them as per

*  note: add the ladder positions together for each conference for totals of 57 in each. 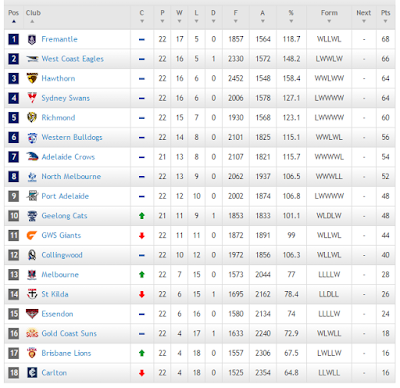 So the three sets of teams to play each other twice (one home and once away) are easily determined by anyone in the AFL diaspora simply by looking at the distribution list above and checking off teams accordingly.

The other games of the season are filled by paying other teams once, with the option to play home or away on a case by case basis to ensure teams play 11 home, and 11 away.

Note also, that the ladder at the end of the home and away series from 2015 is used, as this is the most balanced outcome of the year.

Adjustments to ladder positions from the finals series are not included as (obviously) not all teams have the opportunity to adjust their ladder position.

So the 2016 schedule should be set to teams in the groups below playing each other twice..

Observant readers will note there is no double up of the Western Derby, SA Showdown or NWS or Queensland derbies as well. It is just the luck of the draw that this system spits out that combination this year. Equally, the only double ups for Melbourne 'big club blockbuster' games sit with Collingwood and Carlton or Hawthorn and Geelong. Again, luck of the draw.

And it is fully known here that SA and WA derbies are important for "giving the local fans that extra game to attend".
If your lucky enough to get a ticket as an 'away' fan, of course. (Hint, the extra local game benefits maybe 1,000 to 3,000 people).


So to look at a few further hypotheticals, let's examine possible draws for a team from each group.
First a team from the lower end of the 2015 table.

Carlton would be drawn to play Freo, WB, Adel, Coll and Melb home and away. This makes an initial interstate journey count of two (italicised for your convenience). The other teams they are to play once are listed on the right side of the home and away blocks above.
In the example, there are three more journey for a total of five.

Note also that if you sum up the ladder positions for both right hand side lists, you get 57.

A mid rung team now... lets look at 8th placed
Home and away to the Eagles, Rich, GWS St K and Bris. That's three out of state journeys already.
So rounding out the other 'one only' season match-ups and keeping both sides to a total of ladder positions to 57, North would collect two more interstate trips to play Sydney and Port.

And finally, lets look at two top 6 teams. First,
Again interstate travel from opponents inside their set gives them two journeys, so we balance it up with three away (Syd, Port, Bris), and again both pairs of 6 opponents makes a ladder position total of 57.

Lastly, Hawthorn show where occasionally a team gets unlucky. Keeping the 57 point balance rule for home-away opponent strength, the scenario sends Hawthorn out of Victoria 6 times.
It can and will happen, and as before its just the luck of the draw.

So when the AFL release their fixture that purports to be fair, you will know of an alternate approach that is not rigged to suit the broadcast 'partners', or to satisfy an additional few thousand fans.

That is transparent and has a sense of balance. Where all teams play opponents of all strengths.
Posted by The FMI at 21:38