The season is less than 2 weeks away, so it is time to publish the FMI predictions of the unpredictable. The annual look at the draw, the games involved, and the teams relative strengths, then apply all over many many iterations and scenarios. Then the outcomes are all combined to create an expectations data table.
It is applying science where the variables in a season are heading towards infinite. Yet this is what people do every year, just by thoughts alone. This attempt at prediction has never been 100% right in the 4 years previous, but it did get close enough last year to win "Gigs Ladder Comp".

Preparing the 2016 season data has been an interesting exercise. Normally, there are expectations on clubs that in some cases a better performance (or a trailing off) is expected. But season 2016 brings us a club without 12 of their better players. And these places filled by players with senior experience, and in some cases Premiership experience.

How does anyone adjust for that?
If no change, or a negative performance were to be placed on Essendon, the they would be clearly looking at last and perhaps a win-less season.
Instead a pragmatic approach was taken and a performance expectation applied that generated a reasonable outcome that is grounded in reality, but not overly negative.

Over the thousands of iterations run, the expectations on ladder positions brought forward a few common threads for 2016.
First is that Hawthorn and West Coast are expected as the best two teams, while at the foot of the table, its Essendon to finish last, with Carlton close by.

Also notable was the wide array of teams who had some semblance of a chance of finishing in the top eight. An additional 10 teams have chances, though in some cases it is a slender outcome. Picking this years top 8 is borderline impossible. Which in reality it is in most seasons.

The chart here looks at likely finishing order (from left to right), and the scope expected for each team. 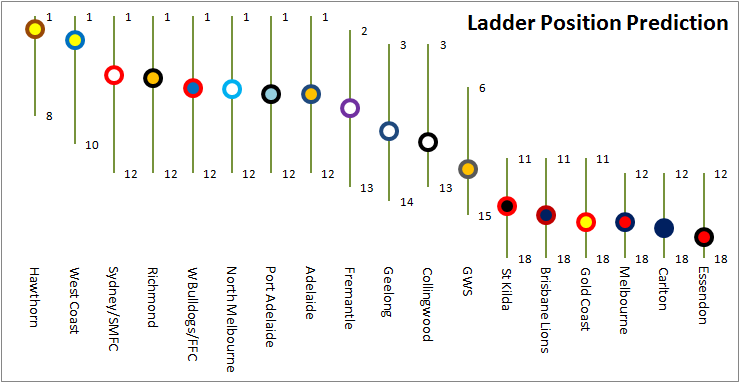 Predicted to miss the 8 are Fremantle who, as mentioned previously, were very good at winning in 2015 but were never able to truly dominate opponents.
Also many pundits see a Dangerfield (et al) inspired revival from Geelong. It is not something the calculations expect though, with the Cats having a lower than ninth life expected, but the door remains about 1/3rd open for a top 8 finish.


The table below lays out the variation in positional finishes per team over the home and away season. As per last year, we have the Hawks and Eagles in first and second positions, and the red-orange hue behind the numbers gives you an idea of the strength of that prediction.

The other key top 8 positions are harder to determine accurately, and there appears to be another 10 teams queuing up for a top 8 spot.
Interestingly, GWS were in the hunt for a top 8 spot last year after a big improvement early in the 2015 season. But a latter season plateau-ing saw them stabilse in mid table. The above table has only a 4% chance of them breaking through as the first of the two new teams to the fold. That is the numbers saying that, but the football world would be hoping for more.


New to the blog this year are the below tables, which list teams and their expected chances of finishing inside brackets.
On the left are positional finishes for the home and away season, broken down into top 2, top 4 and top 8 brackets, along with a bottom 4 and Spoon pair of brackets.

On the right, the same match engine algorithms have been applied to each season's scenarios finals series. It's a first for the FMI blog to go beyond the home and away and begin looking deeper into the post season.
In these calculations, full finals series were simulated, and the grand finalists and premiers predicted. Key point of interest is that while Richmond rank lower than Sydney in all the left hand outcomes, they rank better once the finals start (insert your own 'not winning a final' joke here).
Its a similar outcome for North Melbourne (besting the Bulldogs) and Adelaide (pinching a spot from the Power).

A second approach to take is to look at the number of wins expected per club from the same data set as generated above.
This approach brings minor changes to the 'finishing order', notably with Adelaide now above Port Adelaide and Melbourne above the Gold Coast. The differences are very slight between both data sets, though and likely due to 'draws' not being accounted for in the below. 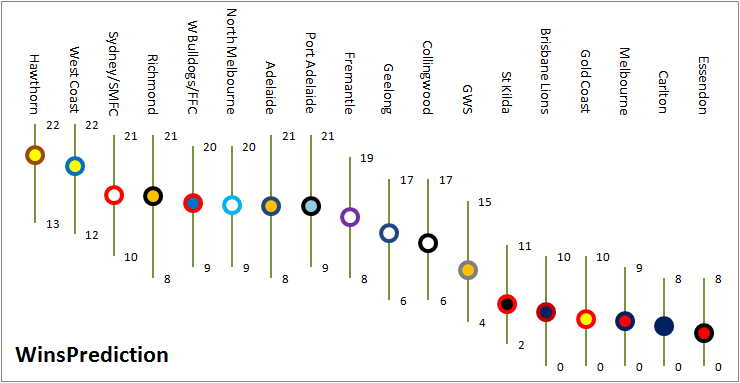 The above chart expressed in table form and heat map is below.
Unlike last season, this table sees a bit more crossover between teams fighting for the top 8 and those expected to rank in the bottom 6. St Kilda and GWS are expected to be bridging that gap this year.


The 'bridging the gap' outcome in the above is interesting as it is not reflected in the finishing ladder position further above. In that table there was a split at 12th in the ladder, with:


Compare that to the season wins data and the gap is not as distinct, with:

Hopefully this is a trend, and teams can start to rise up and create a more even competition, with less teams adrift by two wins or more, as per last season.

Also new this year are a few 'scenario' predictions to be written up. These will be out in the next few days or so, and will look at some alternate factors and outcomes in some detail that would make this post overly long.
Posted by The FMI at 16:59