After blogging many weeks back an expectation of how the season might play out, the plan was to revisit at the half year point and review. Were any teams fitting into the pattern expected? Were there any drifts, or could a 'bolter' be found.

The plan was not to review it so early and certainly not at the approximate one third mark of the season. With such a long season ahead, to think the top 8 being set as early as round 6 could be considered as silly talk designed to fill sportschat 'dead-air'.
But with initial commentary in the various media forms around the top 8 being "set" coming after 6 rounds, a review was thought appropriate.


This season is quite a different season, with some teams leaping well above expectation, and others all but falling from the face of the earth. And there is reasonable points made that the finals teamsets are all but known by this time of the year, including by columnists such as Rohan Connolly.


AFL 2016: Is the final eight already done and dusted?

"Call it the round seven rule if you like, but in a nutshell, if a team wasn't already in the top eight by then, it was almost certainly not going to be there when the finals began four months later.Just once in that period, in 2005, did the top eight after that arbitrary cut-off point alter by more than one team."

So with the current ladder as per right, and using the 'not much scope for change' concept, then you could rule out anyone from 13th and under, based solely on wins-to-date. 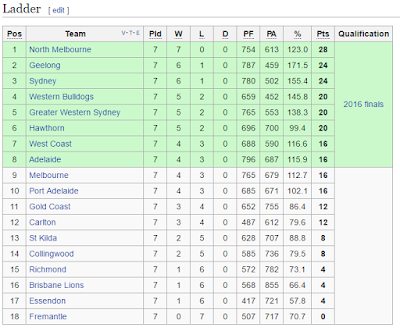 And then put a line through anyone with a sub 90% mark, as percentage could be all important at regular season end.

This leaves us with Melbourne and Port Adelaide as the two with the best record to challenge.

According to the scenarios set above.

Lets just leave that scenario aside for now. Because most people have all but forgotten it.

The other approach, apart from setting the some-what arbitrary rules above, is to use the rankings system of the FMI and consider each team to be performing from round 7 onward at that level. Ghen apply a game result generator to each match-up and alter rankings on the results and repeat for the remainder of the season.
Then repeat for thousands of outcomes to provide a new expectation on ladder finish as below.


The table above is vastly different to the pre-season table generated. Behind the change is the better than expected improvement in Geelong and to a lesser extent, GWS, as well as the calamitous seasons by Richmond and Fremantle though to be fair, we expected Freo to miss the best 8, but certainly not be 0-7).

So at seasons end, we have a slightly different order to the top 8 expected, but essentially the same teams. Sitting immediately outside are Port Adelaide and Melbourne. Both have very low expectations of a final 8 finish.

The below table illustrates a bit further where finishing positions are most likely.


Also of interest is the expected finishing position of North Melbourne of 7th, which is fair fall from their current ladder leadership position.
This would be because the FMI system sees North as having a very easy draw for rounds 1 to 10, before getting considerably harder later in the season.
Kudos Kangaroos for making hay while the sun shines, but buckle up for a bumpy latter half of the year.

But overall, the indications above from the rankings-based predictive calculations, along with the 'round 7 theory' mentioned by Rohan Connolly, do suggest we have our finalists now.
Barring of course any grand runs from the depths, or epic collapses of a current contender.

As always - caveat acroama, and no wagering.
Posted by The FMI at 20:50