A quick post on the preseason series that usually this blog cares zero jots about.

Some in the media were talking about how 'St Kilda won the preseason series' on percentage.
And look they even made a ladder! So cute. 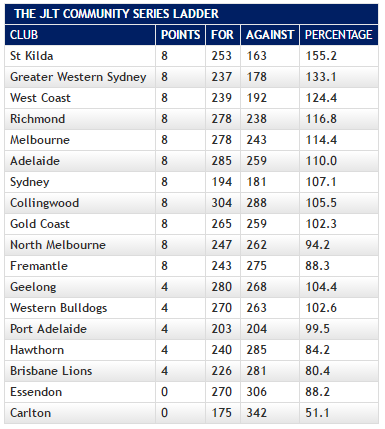 Now this is a simple enough thing to do... wins losses for and against, just like a real ladder.

In the post-AFL world us fans of footy have had to put up with un-even fixtures, gerrymandered draws that escalated bigger clubs into deeper riches, and in recent years a handicapped fixture that set teams into brackets.
Ostensibly sold as 'evening up the competition', it actually creates a harder draw for the top 6 and provides an easier run for the bottom 6.

The latest 'fix for fair fixtures' is even worse. The 17-5 system is an appalling offering with more holes in it than a footy has stitches.
But further commentary on that will come via another post.

It is not unreasonable to suggest that fairness is a malleable commodity at AFLHQ.


Back to the preseason series 'winner'.
On prima-facie evidence as ptr the above, you do have St Kilda squeaking past ten other teams who also went 2 wins / 1 loss. And this is basically in the back of a huge win over Carlton.
But it is not an accurate assessment of 'who won' the series given the inherent imbalance in the fixture, and no clear 'best performers play final' structure.


Further, the above also does not take into account is the quality of opposition put before each team.

Below is the table that has been applied by this blog to the regular 22 game season, but now modified for the pre-season competition.
North Melbourne nominally had the toughest fixture, with the Saints having a neither tough nor easy draw.

Collingwood and the Bulldogs though, both had easy preseason fixtures and are better placed compared to the 2016 AFL ladder than their schedule would demand under the handicap system.

So the above suggests degrees of difficulty in the pre-season fixture. Next its time to look at how teams went against their opponents, allowing for the each others relative strengths.
The quickest and easiest measure at hand is to look at the expected margin via the FMI system vs the actual margin, and the adjustment in team ratings that results from each game.


The outcomes of this is charted below. And as it happens, by the FMI method, St Kilda did indeed have a good pre-season series.
And as another wake-up call to the competition, Essendon were next best, with Richmond and Brisbane all but a tie for third.


Interesting to see rebuilding Carlton last on the list joined by three who would have claims in a top 2 spot in the Bulldogs, Hawthorn and Adelaide.


For reference, the above change chart is compiled from the sum of each teams change data (ratings adjustment) from below.

In a nutshell, these are changes to team ratings based on how they were expected to perform. As an example, Collingwood were expected to win by 41, but only won by 11, so they have a rating reduction. Essendon obviously did better, so are given a rating increase.