Over the last few months, for footy fans out there, football began to change from last September through to late March.
The rise of Footscray from 7th to premiers and the break of the 62 year drought, and the beginning of 'AFL' emblazoned women's football over February to March all turned football on its ear in Melbourne.

The vigour and spirit of how the Bulldogs played, and the humility and sporting nature of their ultimate triumph projected footy in a new light. Same too for the women's games. Courage, endeavour, and out and out joy of playing football were again on display. 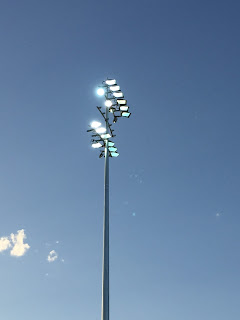 All but gone from those football landscapes were the 'machine-like' celebrations and programmed responses to the media. We began to see more of the people and personalities behind the players.

Attending the AFLW became a different experience too. Open grounds, grassy verges. Warm weather and long afternoons turning to evenings. Gone too were some of the trappings of modern  'pro-football'. You could stand or sit anywhere. No 'members' sections, or premium seating. Can bars were back, as to a variety of foods, from the basic pie to food trucks.

The AFLW set a new feel for footy. A different 'match day experience'.
Less testosterone loaded, though with still plenty of men.  It created a new place for football to exist in the footballing lives of fans.


But quickly back the men's Premiership, it is a footballing milestone that all fans would like to see their club achieve. And when it has taken so long to achieve, the meaning becomes greater. You may have seen the Foxtel and 7 Network produced efforts on marking the meaning of that win to Bulldogs fans, These have dotted the introduction to season 2017, and if you have seen them a quick Google search should find them easy enough.

Instead though, what you may not have come across yet is an audio documentary put together by Dad (John Carr) of the Dad and Mog pod cast. Generated from his own idea and worked on without commission from Club or League, it is oral record of following football through adversity and eventual triumph.

Please click the link here and listen, for we all hope to feel like these lucky fans did.

And we all look forward to the drought breaking for St Kilda and Melbourne, the Dockers and the Tigers... and maybe, just maybe the Suns and Giants too.

Football has a place in peoples lives and that place creates its one value for the individuals, families and families and friends that connect through football.
During the week, a twitter user, Joe, tweeted a series of thoughts on the differing experiences of live football watching at ground. These have been Storify-ed as below, and after some encouragement, Joe also converted those short-form thoughts into a longer format read over at The Footy Almanac.

Below is a short extract of a really good read on the different experiences between AFL football 'behind the glass' and State League football much closer to the grass.

Please click on the title below, and read the full item at the Almanac site.

... The game plays itself out and I silently marvel at the huge effort, second efforts, and team effort from all these tough men, finding their way in the brutal world of footy. Some of them desperate to launch their careers, some trying to hang onto what is left of theirs. The wind picks up, the leaves of surrounding trees rustle and the sun disappears. I have enjoyed my morning. The standard was strong and I just loved the sounds and smells. The simplicity of leaning on the fence, the proximity to the play, and the bare honesty of the players’ endeavour in front of the tiny crowd.  ...


(tweets that kicked off the article).