Who would have though that in consecutive seasons that we would have had two underdog tales, of different foundation, get up to triumph.

Thirty seven years is almost two generations. It is a long time between premierships for one of the bigger AFL clubs, and for the approximately 70,000 members.

The FMI system again didn't tip the winner for this seasons grand final, much like last year. It rarely gets an underdog upsetting apple carts.
Also of note, it assumes the grand final to be the special game that it is. A one off, do-or-die-trying game where players rise above and beyond. Sufficient enough to neutralise any home ground advantage. Various schools of thought thing that is a 'wrong thinking' approach, but it is standard FMI practise for all grand finals.
If a HGA was applied, then the FMI system would have tipped the narrowest of margins in Richmond's favour. Purely hypothetically, of course.


Overall on the tipping front, the season score was 133 correct tips at a meagre 64.4%.
On the accuracy of margin front, the MAE finished at 30.4, which is a nice number.
Finally, on the Monash scoring system, a total of 1700 was the result. Which is interesting as it meant a fifth place ranking. Yet during the season the FMI score was struggling to place top 10.


Over the duration of the finals, the Tigers scaled not just amazing heights on the field, but accumulated a +119 rating point rise in FMI rankings, and moved from 6th to 3rd.
And overall through the finals, Adelaide regained and the lost top ranking position from Sydney.


There has also been plenty said about how Richmond were also the underdogs and 'coming from 13th' to win the flag. The '13th' part is in a way true, but it ignores the three years before where Richmond finished top 8 each year. This was a decent team on the rebound after an aberration season.

That said, as posted before and updated below, Richmond did hit form at the right time of the season. In their three finals matches, they needed to defeat the second best team of the year, followed by the fourth best team, and then ultimately the minor premier. In winning everything, they performed well above expected levels. The table below shows how high over expectation, and is based on a near 50/50 split in performance level (i.e. one team improved and the other underperformed at similar rates).

To perform as they did, the Tigers in-game ratings were well over the best ranked team at any time this season.

Ultimately, they played and defeated three of the best 4 teams by ladder position. They did miss playing one of the top 2 FMI-ranked teams though. Another that was also hitting peak at the right time of year.

But at the end of it all, you can only defeat who is in front of you. A well deserved premiership. 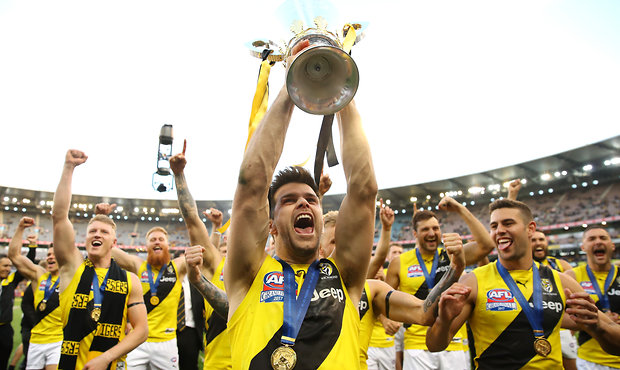