Last years first tipping post of the season noted how we had just had a 'summer of footballing love', with a drought breaking Bulldogs Premiership, and the inaugural AFLW season just rounding up.

And this summer? Well its been a bit of a mixed bag, starting with another drought breaking Premiership, and Season 2 of the AFLW and its dramatic last round.

How good is footy?


Well not that good when you add in a confection called AFLX into the mix. AFLX is an interesting concept for developing the game in non-footy states, over seas markets and even among youth and veterans in solid footy states.
If it can be set-up right, it could become a conduit to new fans, markets and even a pathway for emerging talent prior to full AFL standard play.

But instead we had... 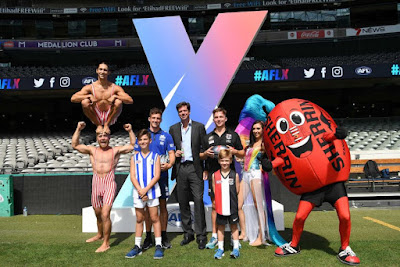 Which equates to awkwardness, faux glitz and glamour, light up posts and 'Zooper goals' (which were less an achievement and more a sales opportunity).
The PR hype also talked of this game, the short form, on smaller rectangular grounds, with less physicality but higher skills (?) as 'the best form of football'. Which is quite a claim.
Who in any professional organisation runs down their premium product to develop a new one?
Perplexing marketing.


In the context of another summer of love for football, this was that one night you had too many drinks and the prawns were a bit off, leading to seeing all those things back up and out again.

AFLX can be a force for good in the AFL and sporting worlds. It just needs re-tuning, down. Way down.
Nope, further down than that too.


But anyway, enough of that. Back to footy.

The below table is the slightly modified (from 2017) rankings for the start of the year. Minor 'boldness of tip' tweaks, and a few other modifications have been made and it is worth setting the record straight before the new season.


There has also been cosmetic changes to presentation. Not much, but they are there.


The tips for this extended weekend are as here.

Round one likes to offer at least one flip of a coin game and this time its come in spinner to Hawthorn and Collingwood.
A win to either will set their year up, you might think.

Otherwise, for the pipe-opener, it looks a bit 'meh'.

Enjoy your football.
Posted by The FMI at 10:38