Its the end of the home and away season and the end of 10 teams for 208, all except for that scheming and conniving and stuff related free agency and the likes.

Maybe in the coming weeks I'll look at the teams done for the season and do some colourful lines and such.
But in the interim, its time to look back and look forward.

First, the preseason predictions worked out quite well.
This screenshot comes from this post published at the start of the year... that's the top 9 teams selected to finish between 1st and 10th, with really only Adelaide's crash and burn season sitting as an outsider. 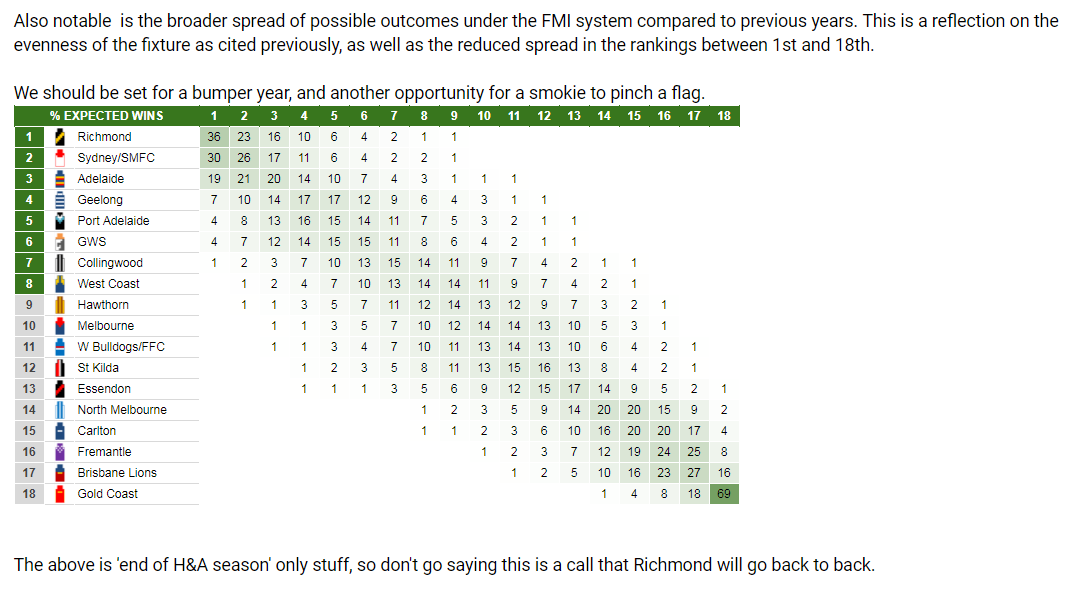 Another seven from nine.
This remains tedious.


None of the above are overly close, but with a sub 30 ME, its not all that bad.

This year, unlike years past, the best 8 ranked teams will play into September.

Though of course, if Hawthorn or GWS lose by a lot, then Essendon could drift into 8th... or even 7th!

Four games for week 1 of the Finals. And they are very close in the last two of the weekend.


Effective coin tosses for the Elimination finals... which is just what you need for cut-throat finals.

Also, as done last year, here is the FMI system look into possibilities on how far your team will go into September.

Everyone is playing this coming Elimination / Qualifying Finals week, so all 8 teams are 100% chance to play.
From there, the numbers get interesting. So here is how to read it.
In the top half West Coast are 26% to play the Semis, meaning they are more likely to win and progress to the Preliminary finals, than Collingwood.

In the bottom half, Melbourne are more likely to progress than Geelong to the Semi's.

Units above are % chance of playing each week of finals


Otherwise - for the Grand Final, it looks to be Richmond vs Melbourne, by throwing the FMI rankings and current form through the simulation model.

All the Grand Final pairings thrown up are:


Nominal grand final 'home' team listed down the side of the table, with 'visitor' opponents across the top.

Again, the above are the % chance of two opponents pairing up for the last game.
While the table above this table had Richmond an Melbourne on 68% and 41% chance to play in the Grand Final, they will meet in only 26% of the simulations.

Also, a reminder from the start of the month.