So here is something different from this FMI site.

Apart from the numbers and data, I like the way footy communicates and connects to people. The fans and the players all experience great moments, and odd moments, in footy. These moments become touchstones. Part of footy folklore, and even part of the vernacular.

We as footy people all know when under pressure to "Hit the boundary line".

We all flew for a mark as kids (well the older of us anyway) and yelled "Jesaulenko, you beauty". We wanted to be Jesaulenko, so much so that a speccie became a 'Jezza'.

We all think when scores are tied in the last quarter that "we could be back here next week".


I love these sorts of words and I reckon enough of you out there do too. So I've prepared some key footy words as t-shirts. And the initial release will focus on five clubs and some words that carry weight and importance in this series.

Because footy, and words, have meaning.

Acknowledgements:
I must also thank everyone's favourite shirt designer, @4boat, for the instruction and guidance on how to get this thing off the ground, because I had no idea on the most basic of design tools and style.
Also thanks to all the other brilliant people out there (like @leaguetees and others) who can actually draw and do great inspirational stuff.

And I've started off the series not with "Hit the boundary line" or "I tipped this", but with the three quarter time address from Alan Jeans in the 1966 Grand Final. This tiny snippet of that last exhort to his players to give it one last push.
Have a listen to it on this YouTube link, but even better watch what it means to the players in the documentary The Final Story. The key moment is just after to 25:30 min mark. 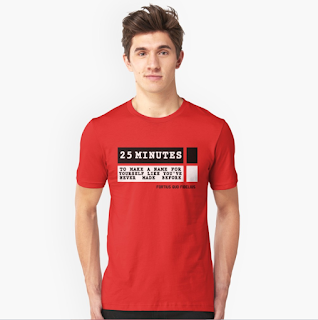 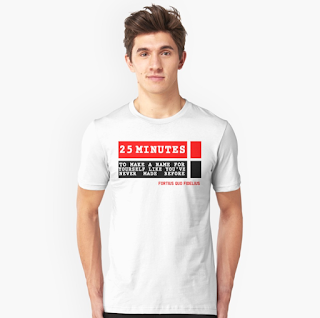 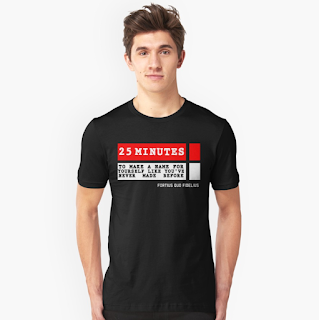 I've set up the three shirts in club colours above (click to expand). Redbubble also lets you choose other colours, but really who wouldn't choose club colours?


INSPIRE ME
Also another great coach's speech was from Ted Whitten's last game in charge. His last three quarter time address.
The full address is again on YouTube and its really the last 20 secs or so that resonate with the footy world.
The designs below are all slightly different, with the late 70's design 'three hoops' motif on the left, and the Whitten-era (and recently returned) two hoops motif on the right. 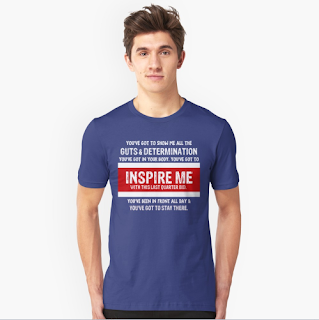 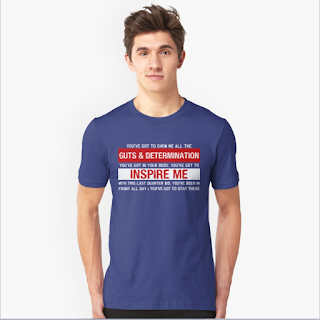 Again, the set up is for red and white print on a blue shirt to best represent the club jumper. Redbubble also lets you choose other colours, but really who wouldn't choose the jumper designs as per the footy club?


PRESTIA
Stepping away from the coaches, one of the highlights of the 2017 Grand Final was the run around the members side by Lambert, who then did the unselfish thing of passing the footy to Prestia to goal.

Most people would know of this through Bruce's call. The "its Tiger Time" commentary is ready as a shirt in black on a yellow shirt, or with yellow text on black. 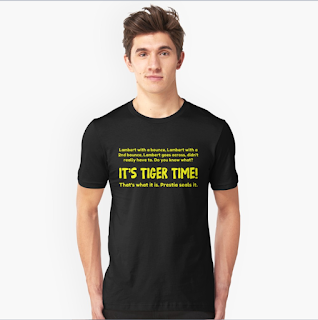 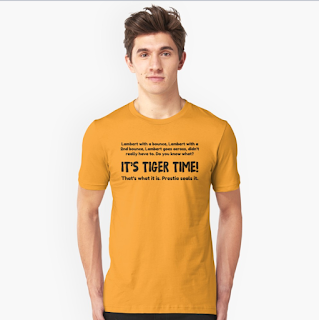 
Personally I prefer the 3AW commentary of this goal, which was somehow circulated on the internet in 2017. The AW call now exists over-layed on this YouTube video so you can go back and hear it correctly. Even though the doyen Tim Lane 'gets it wrong' by calling Lambert as 'Caddy', his roaring of "doesn't matter, nothing matters" makes the day for mine.
So much better than the cliched 'Tiger Time' line. Anyway, to each their own, so you have a choice between Bruce and Tim, as well as on black or on yellow. 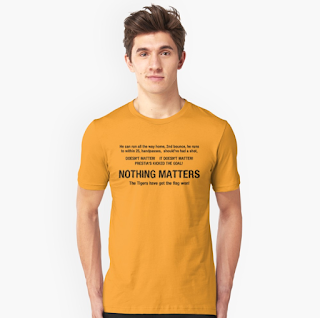 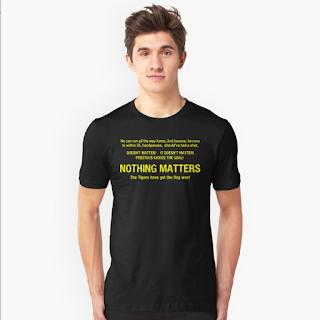 Again, Redbubble lets you choose other colour shirts, but come on Tiger fans... there really needs no change to the originals and the best.

This shirt is also inspired by another drought breaking Grand Final, but it is not what the coaches said, or the commentators. The chosen text is from the wall of the Arden Street change rooms. Before 1975, North Melbourne had not won a Grand Final, and on the wall of the club were the words on the shirt.
That text is remembered by Sam Kekovich in this bit of YouTube footage, taken from this upload of the documentary "The Final Story: 1975", which you should watch. 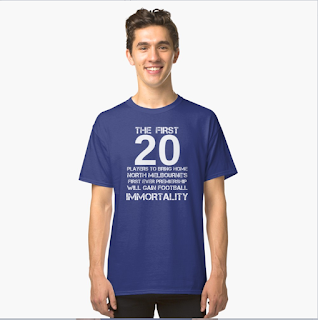 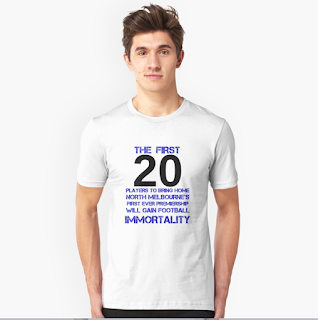 And in the footy world a lot of those first 20 have achieved a sort of immortality.
Doug Wade, Arnold Briedis, Keith Greig, Mick Nolan, Barry Davis, Brent Croswell, Sam Kekovich, Barry Cable just to name a few.
And also Wayne Schimmelbusch, who wore the number 20 with distinction at Arden St for 306 games and two premierships. His number 20 is the inspiration for the big 20 in the middle of the shirt.


Defy the Redbubble multiple colour selections and go for white with blue (and black) text, or the all white text on royal blue.

Another Grand Final, this time the 1979 VFL Grand Final and another piece of commentary. Is it as iconic as the action itself? I'll let you determine that.
Certainly though, the Wayne Harmes tap in from before the boundary (or from the Members car park - depending on your allegiance) as called by Peter Landy, is one of the great and controversial moments in footy.

So now, with white on a navy blue tee, you can remind your fellow footy fans that it really was a goal. 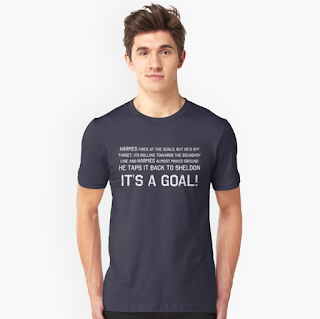 There is only one way, Blues fans, despite the Redbubble multiple colour selector - Navy, navy and more navy.

And the last tee in this the first series release, is this classic home and away moment, and equally classic call by Lou Richards. The day Leigh Matthews broke the point post at the school end of Windy Hill in 1982.
Talk about a He-Man! And some design inspiration from the He-Man cartoon. 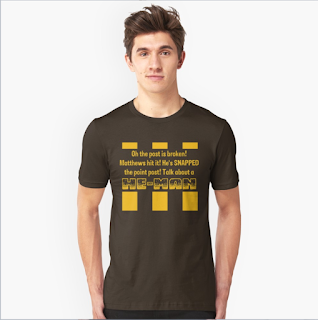 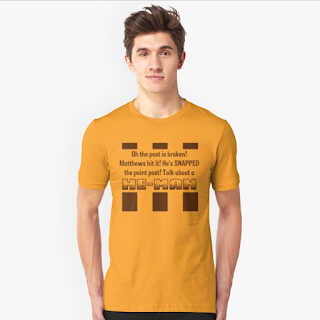 And you know what? With the above colour combinations in the 'preferred design', I am only too happy for you to choose other colours Redbubble offers up, because - you know - the yellows and browns... sheesh!

I am more than happy to take advice on other great moments that can be converted to tees, so just comment on this post or via the twitter if you have some ideas.
There are plenty of obvious ones, which I've avoided for now because they are either too obvious, or that the collective memory is different to the actual quote (Hello "don't think, do").
I do have a few others in mind already but contributions are most welcome.


Finally, if there is enough (any?) demand for any of these as phone covers, let me know and I'll tweak the designs to fit.
Posted by The FMI at 18:07