Something ill-considered for a Sunday afternoon. A Football Cultural Divide of a continent.

The Barassi Line has been proposed before, as per wiki and this in Honi Soit.
The line itself in those articles has been, in my opinion, drawn wrongly as it bisects Canberra and loses some good footy clubs over the Murrumbidgee. So for the sake of this potted analysis, lets include the ACT, home of Jesaulenko, Cowboy Neale and James Hird.
In truth, there is quite a crossover along and around the line in Southern NSW that it is hard to truly split those electorates.

So the electoral map, overlaid with the black Barassi Line, looks like this (original graphic via The Age, Sunday 19/5). 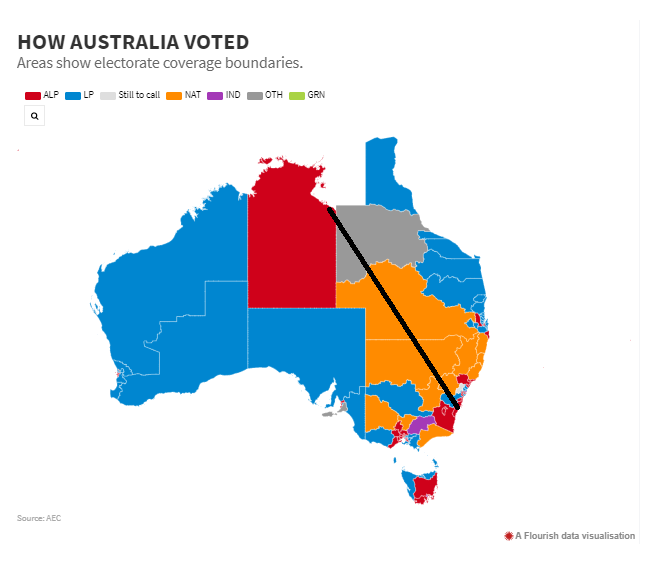 So for the sake of a seat count, in the 'theoretical split continent' the counts are as below.


North of the Barassi...

A total of 74 seats.
All of Queensland. All of NSW except the seats of
- Farrer on the Murray (Lib),
- Riverina just north east of the ACT (Nat) and
- Eden-Monaro (ALP) on the NSW far south coast.

Also, for the sake of this assessment, Parkes in the north west corner of NSW (Nat) is geographically more in the 'south of the Barassi Line' side, but would be culturally more Rugby than Australian Football.


74 seats in total, with a theoretical majority of 37 seats.
So the seat count looks like this for the Rugby side of the line.

42 seats for the LNP, and a majority.


South of the Barassi...

A total of 77 seats.
All of WA, SA, the NT, the ACT, Tasmania and Victoria, plus the electorates of, Eden-Monaro, Farrer and Riverina.

77 seats in total... a theoretical majority of 39.
So the seat count looks like this for the Australian Football side of the line.


40 seats for the ALP, a workable majority for them in that half of the divide.


Even if the line were to bisect Canberra, then that would be approx 3 seats less to the ALP, but still enough in the total of the 'south' to be in majority.

What does it all mean?

Not much, given people vote for a myriad of reasons.
Is football an influence on peoples lives?  Absolutely.

There is action from the major Leagues in Australia to address their social positions, as seen in the AFL's, NRL's and ARU's struggles with hate speech, violence against women, racism and a drink/drug culture. These are fine leadership examples for society, driven 'top-down' but the respective Leagues.

Putting aside the 'top-down' approach to social influences in Leagues, how does footy at the community level influence social culture and therefore voting patterns?.
What are possible measures of the influence of 'footy culture' at the grass roots? What are the differences between the two codes, on the ground and in the societal links they form in their local communities?
Does Australian football produce a more socially inclusive society?
Is there any link between the culture of rugby and the more Liberal ethos of the individual first over the collective?

Something for the readers to consider as I have neither the skills to determine the answers, nor the intellect to derive a path toward understanding any of the questions.
Posted by The FMI at 22:35